Micro-apartments: the hottest new trend sweeping the German real estate market
German developers and investors from around the globe are scrambling to cash in on this emerging trend

Micro-apartment fever has taken Germany by storm.
As the name implies, micro-apartments are small flats — typically between 20 and 30 sq. m each — that contain only the bare essentials, i.e. a sleeping space, a bathroom with a shower and a kitchenette.
Most micro-apartment buildings contain self-storage units, laundry facilities and communal lounge areas to accommodate for the lack of space in each flat.

Despite their Spartan conditions, micro-apartments have proven incredibly popular among a certain demographic in Germany — so much so that developers are scrambling to expand the market.

German newspaper Frankfurter Allgemeine Zeitung reported there are presently about 25,000 micro-apartments in the country, and several thousands more are set to be built by the end of 2018. The projects will receive state support: the federal government plans to invest €120M in the micro-apartment market expansion.

Where is the demand for micro-apartments coming from?

The market of micro-apartment in Germany targets over 30 million people, including students, singles and tenants whose primary places of residence are far from the big cities they work in.

In recent years, one-bedroom flats have proliferated; between 2011 and 2014, their growth rate was double that of the country’s total apartment growth rate.

The increased popularity of small residential properties is likely attributable to a notable uptick in one-person households over the past several decades.

In 1961, flats occupied by one tenant accounted for 21% of all German households; by 2012, that figure had nearly doubled, reaching 41%. This trend is attributable to a declining birthrate, decreased marriage rates and a general increase in the popularity of living alone. 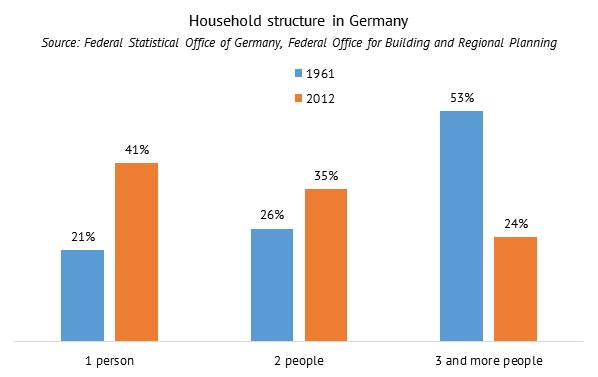 Though micro-apartments traditionally targeted students and commuters who only live in the city on weeknights, their target demographic has expanded to include singles of all age groups who wish to reduce their monthly rental costs.

Due to their minuscule size, micro-apartments in large German cities rent for an average of €400 per month. For comparison, according to cost of living database Numbeo, a one-bedroom apartment in the center of Berlin typically rents for nearly €700 a month, and the same in Munich typically goes for nearly €1,000.

Because of their relative affordability, micro-apartments are very popular among prospective tenants from all walks of life.

They are particularly appealing among tenants looking to rent on a short- to medium-term basis.

In Germany, tenants traditionally face considerable obstacles when trying to rent for anything less than the long term — such as the obligation to pay a security deposit equal to three months’ rent and heightened credit history scrutiny. To the contrary, micro-apartments tend to cater to short- to medium-term renters.

They also boast a plethora of comforts that are tougher to find in standard apartments. Most are newly built and fully furnished and equipped. What’s more, a range of apps now exist that enable tenants not only to choose their apartments, but to outfit them with a custom selection of dishware, home appliances and furniture — all from their mobile phones.

Micro-apartments also offer creature comforts that hotels and other types of short-term rentals lack, such as private kitchens and bathrooms.

For all of these reasons, demand for micro-apartments is high across Germany, and is only expected to soar further in the future, particularly in such cities as Berlin, Hamburg, Munich and Frankfurt, whose populations are growing at rates of some 1-2% each year.

Why investors and developers love micro-apartments

Micro-apartments aren’t just a smash among tenants; more and more property investors and developers are flocking toward the trend.

More than 50% of Tranio’s clients have expressed an interest in commercial property in Germany, and we regularly recommend that they consider this burgeoning trend for a plethora of reasons, ranging from their low market-entry threshold to their solid yield rates.

Micro-apartments in major Germany cities sell for as little as €100,000. As German banks offer non-residents up to 50% LTV loans at 2% p.a., foreign investors can pay just €50,000 upfront to cash in on this trend.

In addition, a special mortgage rate of 1% can apply to buildings constructed with the use of the latest energy-efficient technologies.

Financial institutions are offering such low interest rates for micro-apartments because they have observed their growing popularity and relative liquidity.

Furthermore, high-demand and low rental rates all but guarantee 100% occupancy, minimizing the risk that the owner will lose rental income during lengthy vacancy periods.

The short-term nature of micro-apartment lease agreements also empowers owners to increase rent in order to keep up with market demand.

Traditional landlords often face significant limitations in this regard. For instance, local regulations in Berlin prevent landlords with long-term tenants from raising rates by more than 10% above the average rental price in a given district, or in general by my more than 15% over the course of any three-year period.

In Germany, micro-apartments generally yield about 4% (after deducting property management fees, but before taxes). Standard-sized flats with long-term rentals, on the other hand, typically yield some 2-3%.

And for foreign investors, as well as local investors that don’t wish to actively manage their rentals, the German market boasts numerous property management companies that can resolve all tenant-related, administrative, payment, insurance and maintenance issues. Some such companies even offer renovation services.

This option enables owners to reap all the benefits of a rental property without having to take on the grunt work traditionally associated with being a landlord.

Developers also have a great deal to gain from micro-apartments as they can sell them at higher prices per sq. m. than they can larger flats. This boils down to a basic tenet of the property market: the smaller the flat, the higher the price per square meter.

New developments tend to sell out well before they hit the market. Investors purchasing micro-apartments in 2016 will likely have to wait until 2017 or 2018 for their purchases to materialize.

In short, everyone has something to gain on the German micro-apartment market: tenants get inexpensive and quality accommodations, investors can earn solid yields with a low market entry threshold, and developers can earn excellent revenue per square meter.

Emerging Trends in Real Estate® Europe is a joint survey by PwC and the Urban Land Institute. Now in its fourteenth edition it provides an outlook on real estate throughout Europe for 2017 and beyond....
Read more
24.02.2017

London’s rivals: the case for Berlin as alternative financial hub Germany’s capital offers a growing tech sector and lower property prices for those looking to move on in the wake of Brexit Read next Brussels...
Read more
22.02.2017

Median asking rental prices in Berlin increased strongly in 2016 despite a rent cap being introduced in 2015, up 5.6% during the year, the latest figures show. The growth was led by apartments with rents...
Read more

Agree totally, while the population of Germany is realitivly static the number of households is increasing. 1 bedroom (2 zimmer) units tend to rent for more per sqr mtr and have a higher demand than a typical family place.

Best Thing is to buy studios in Berlin with 22-30sqm.
is my opinion.

We went down the lane, by the body of the man in black, sodden now from the overnight hail, and broke into the woods at the foot of the hill.

Open chat
1
Powered by
Hello, how can i help you? WhatsApp me here. Just click the green WHATSAPP Icon left below.